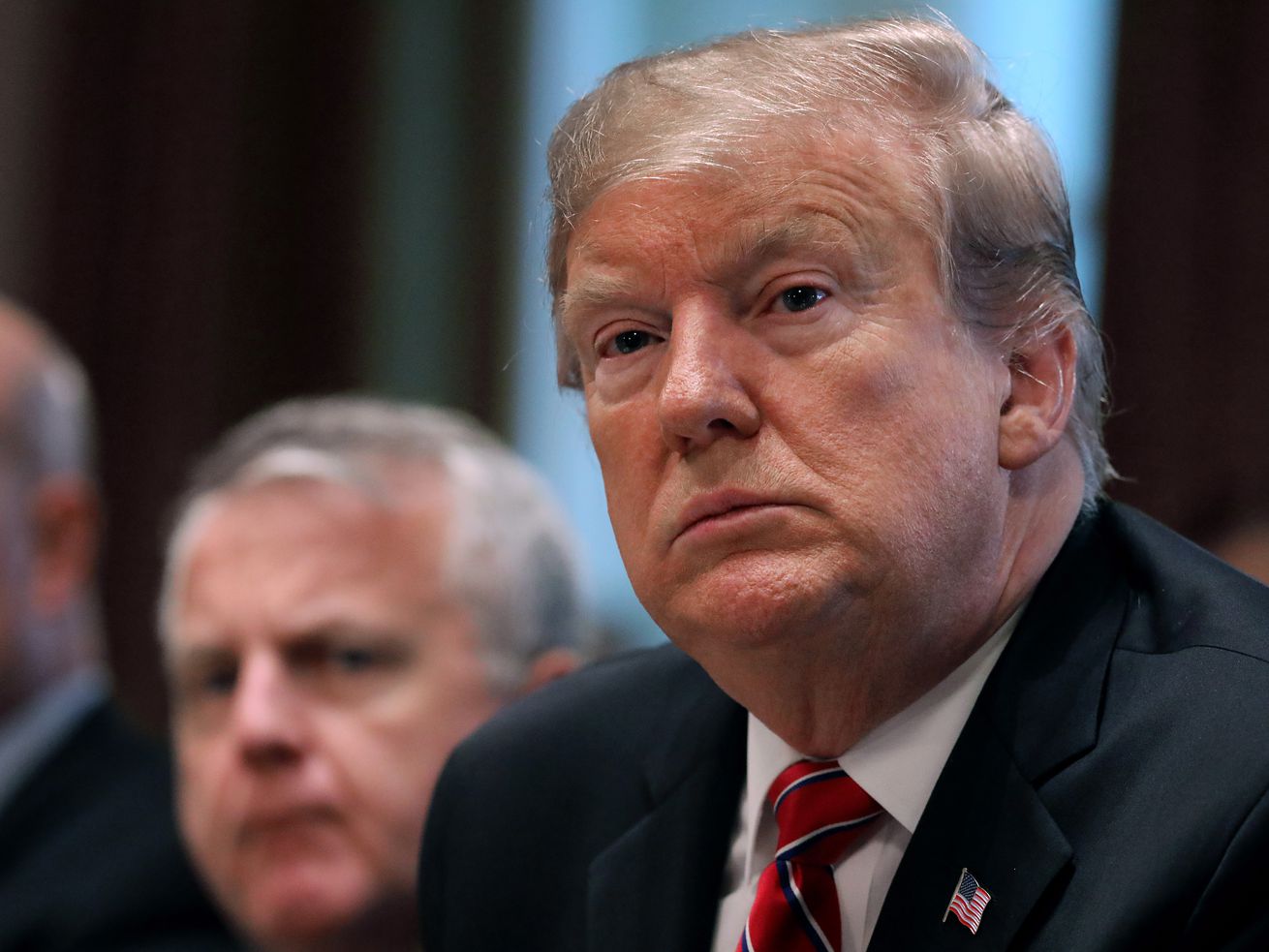 The president lays out a bold vision for how to make the US No. 1 in artificial intelligence, but critics say it’s just hollow words.

President Donald Trump released an executive order on Monday that laid out a broad plan — but no new funding — for how the US will get ahead on artificial intelligence.

The “American AI Initiative” comes at a time when the US is competing fiercely with China and other countries to better develop AI technology — which has wide-reaching applications, from the military to the health sector. The Chinese government released its own sweeping AI plan nearly two years ago and has committed tens of billions of dollars in spending toward developing it. The US, so far, has put out some research reports on the state of AI but has lacked any federal-level national policy agenda.

But unlike the AI plans coming out of China and other countries, Trump’s executive order did not allocate any additional federal funding toward executing the vision. Instead, the document calls on federal agencies to prioritize existing funds toward AI projects.

“Continued American leadership in Artificial Intelligence is of paramount importance to maintaining the economic and national security of the United States,” Trump wrote in a press release accompanying the order.

It’s a far-reaching plan that focuses on not just technological development but also progress in related areas — including government regulation, education, private-public sector data sharing, and international diplomacy. In some ways, it has answered the calls by academics and lawmakers for the US to take stronger leadership in an increasingly competitive global playing field for AI.

But it has also received its fair share of criticism — mainly around the funding (or rather, lack of it). Sen. Mark Warner (D-VA) and former head of President Obama’s economic council Jason Furman have voiced doubts about the lack of support and the plan for follow-through. And some researchers were disappointed that immigration wasn’t mentioned in the order — since AI development in the US routinely relies on the skills of talented experts from abroad.

Here’s a deeper look at what the executive order calls for — and where some of the details have yet to be sorted out.

What has the government done on AI up to now?

While in the White House, Obama tasked a committee of experts with creating executive reports on AI; the most recent one was released in 2016, a month before President Trump took office. The report laid out a series of policy recommendations, some of which closely resemble the ones in Trump’s recent executive order.

The Trump administration only weighed in on AI last May, when it hosted a summit on AI at the White House and created the Select Committee on Artificial Intelligence, which includes representatives from the Department of Defense, the Defense Advanced Research Projects Agency (DARPA), the Department of Energy, the National Science Foundation, the Intelligence Advanced Research Projects Agency, and other national agencies.

Prioritizing but not funding AI

The Trump order first and foremost emphasizes the need for the US to improve its research and development in AI. It states that the US must “drive technological breakthroughs in AI” to “promote scientific discovery, economic competitiveness, and national security.”

The order gives these agencies a timeline to submit their annual plans to the executive branch — but only after the president has submitted his budget request to Congress. Meaning — at least based on this initiative — that agencies would have to work within the administration’s topline budget rather than play a role in shaping it.

Compare this approach to China, where individual cities like Shenzhen are spending $15 billion on AI initiatives alone, and Trump’s plan seems hollow to some critics.

Lynne Parker, the assistant director for artificial intelligence at the White House Office of Science and Technology Policy, who helped work on the executive order, responded to this criticism in a statement, saying in part, “With the coordination and accountability directed by the Initiative, federal agencies can better put to use the dollars appropriated to them by Congress to ensure American AI leadership, as well as identify the barriers that currently impede AI R&D.”

Furman, who worked on the AI task force under the Obama administration, appears skeptical. As he told Technology Review, “The administration’s American AI Initiative includes all of the right elements; the critical test will be to see if they follow through in a vigorous manner. … The plan is aspirational with no details and is not self-executing.”

Congress could also allocate more money, but unlike an executive order, that would require bipartisan support. While some lawmakers have for years introduced legislation calling to bolster the development of AI, nothing has successfully been turned into law so far.

Opening the vault of government data

The second goal is for the federal government to share government “data, models, and computing resources” with researchers and the private sector. Tech giants like Google, Apple, Microsoft, and Amazon, to name just a few, should welcome this potential treasure trove of wide-reaching government data that is necessary to train AI algorithms to become as smart as humans — or smarter. Google already has a trial program with the Department of Veterans Affairs to access medical records that helped it develop early kidney disease detection tests.

“We really have become aware of the promise of AI, but also there are many opportunities here to ensure that we as Americans are benefiting from it,” said Parker.

But these collaborations also bring up concerns around data and privacy. At a time when many tech companies have proven to be unreliable guardians of consumer data, should the government be trusting them with even more sensitive things like health records? Which brings us to the next goal.

Trump’s order acknowledges the need for the government to ensure that civil liberties are protected in the use of AI — specifically with regard to military and surveillance applications. So far, this has been one of the biggest criticisms of largely unregulated development in AI from policy nonprofits including the American Civil Liberties Union and AI Now.

The executive order, while it doesn’t address these concerns directly, does contain the phrase “civil liberties” five times, and lays out a section and timeline for developing potential federal policy around regulating AI.

The order calls for leaders at the Office of Management and Budget, the Office of Science and Technology Policy, the Domestic Policy Council, and the National Economic Council to draft a memo within 180 days of the order’s release that advises setting guidelines for the AI sector that will “advance American innovation while upholding civil liberties, privacy, and American values.” Federal agencies with regulatory power will consider enacting the proposals in the forthcoming memo.

While it remains to be seen what regulations, if any, these groups will recommend, it’s an important step for them to be dedicated to even thinking through regulatory approaches.

The third goal of the order is to train workers. Training a generation of new AI experts domestically is a laudable goal that almost everyone can agree on. As with the call for more AI R&D, the big question is where that funding will come from.

Again, the agenda here lacks specifics, broadly calling for agencies that provide educational grants to “consider AI as a priority area within existing Federal fellowship and service programs,” including at the high school and university level. The Select Committee on AI has 90 days from the time of the order to make recommendations in this area to the broader National Science and Technology Council.

Right now, US public education is facing a crisis as, across the nation, teachers who are fed up with stagnant wages and budget cuts are taking political action. Last month, tens of thousands of teachers in Los Angeles went on strike, and in Denver, thousands more are doing the same. It remains to be seen how teachers who are already saying they are spread thin will be able to dedicate resources to AI programs.

The final goal of the order is for the US to align on joint AI initiatives with allies, and protect itself from competing countries (subtext: China) and adversaries. Again, the plans here are vague — calling for the US to “promote an international environment that supports American AI research and innovation.” The document calls on the assistant to the president for national security affairs, the Office of Science and Technology Policy, and others to come up with an action plan around this.

The executive order didn’t mention immigration, a topic many AI experts say is key in setting a national policy agenda around technology. Some of the top researchers contributing to AI development in the US have been immigrants — Andrew Ng, Yoav Freund, and Yann LeCun, to name a few. By some estimates, immigrants make up a large majority of graduate students in computer science at US universities. While Trump has spoken to the value of merit-based immigration, his policies have made it harder for many skilled immigrants to work in the US. Meanwhile, countries such as Canada have created programs to welcome the technical talent that the US is pushing out.

“Our secret weapon in the US historically has been our ability to import the world’s AI talent,” said Greg Brockman, the co-founder and CTO of the influential AI research group OpenAI.

Without that capability, Brockman said, he worries that groups — including OpenAI itself, where the team of 100 employees speaks 19 different languages — could lose their competitive edge. He said he wishes that a more open immigration policy was addressed in the executive order.

The follow-through on this will be critical.

Most of the goals stated in this executive order — increase AI development, set guidelines for regulation, train the workforce — are broadly popular, but how feasible they are without any additional plan for funding is a different question.

The responsibility is now on selected federal agencies to come up with a plan for how — and if — they will be able to shift existing resources.

The administration has said that many details about executing the order are forthcoming. But without knowing more about what funding for Trump’s AI initiative will look like, it’s hard to say that it will be able to deliver all that it aims — to cement the US ahead of China as the responsible leader in one of the most important technologies of our time.